Security professionals looking to improve their workplaces’ emergency preparedness plans may have noticed that the Occupational Safety and Health Administration (OSHA) strongly suggests the use of evacuation route maps—but there doesn’t seem to be a specific requirement. However, the lack of a clear requirement does not diminish the value of these materials to your emergency plans and your workforce’s safety and security. 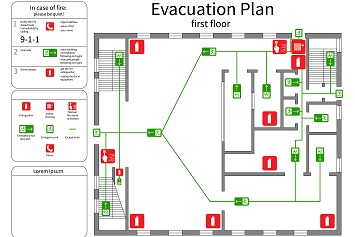 It is true that the OSHA regulations do not specifically require a facility to have “evacuation route maps.” However, many OSHA guidance materials strongly advocate the use of such maps or floorplans, some to the degree of specifying it as a requirement. Appendix E to Subpart E of 29 CFR 1910 which notes it is a “nonmandatory guideline to assist employers” states in connection with 29 CFR 1910.38 (emergency action plans) that “The use of floor plans or workplace maps which clearly show the emergency escape routes should be included in the emergency action plan. Color coding will aid employees in determining their route assignments.” [emphasis added]

Similarly, an OSHA booklet regarding planning for workplace emergencies and evacuations found at https://www.osha.gov/Publications/osha3088.html states that “at a minimum your emergency action plan must include… emergency escape procedures and route assignments, such as floor plans, workplace maps, and safe or refuge areas.” [emphasis added]

A OSHA webpage entitled General Business Preparedness for General, Construction and Maritime Industries says “At a minimum, for businesses that are required to have an emergency action plan (EAP), the plan must include: emergency escape procedures and route assignments, such as floor plans, workplace maps, and safe or refuge areas (example shown below) (29 CFR 1910.38(c)(2) and 29 CFR 1926.35(b)(1)).” [emphasis added]

Consequently, even if not a specific regulatory requirement, it would appear to be a best management practice to include an evacuation route map and/or floor plan in a facility’s emergency action plan. Since the objective of the OSHA requirements is to keep employees safe in the event of an emergency and to evacuate them quickly if an evacuation is required, it’s clear that OSHA, regardless of its regulatory language, believes that such visual tools will assist employees in understanding how to exit the building in a safe and orderly fashion.