Joseph Priestly, an 18th-century theologian, once said “The more elaborate our means of communication, the less we communicate.” I wondered what he would make of today’s world where social media, texting, Voice over IP, two-way radios, mobile phones, Wi-Fi, mass notification and more stream across our airwaves. Nowadays, our ability to instantly communicate with one another is the single most effective means for students, faculty, staff, administration and law enforcement to manage everything from mundane daily activity to more stressful, albeit less frequent, emergency situations. 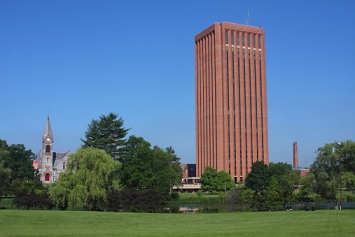 Students, faculty and staff are better informed today than ever before. But the expectations of what content is included in our communications have increased geometrically with the adoption of each new technology. On-demand access to information and “mobile-first” technologies that deliver multimedia content have taken precedence over traditional, more one-dimensional approaches.

Now those same expectations are starting to influence how campuses are reimagining their physical security and life safety systems. Thanks to advances in technology, schools can meet those demands for instant information anywhere via any devices by simplifying their infrastructure choices.

The Advantages of Consolidating Systems on IP

Many physical security and life safety solutions have moved to a common TCP/IP backbone to expedite transmission of critical situational awareness.  Video surveillance technology was the first to make the shift from analog to digital. And nowadays networked cameras are a common sight in school systems across the country. Access control is another effective solution that has made the transition to IP, though still in the early stages of adoption by schools. And, most likely the school’s telephone system resides on the network given that Voice over IP (VoIP) solutions now dominate the telecom space.

The point is: one way to simplify a school’s security and life safety planning is to start with a common infrastructure for the systems being considered. By doing so, the school not only increases its opportunity for integration between systems, it also puts the school in a better position to scale those solutions because it can leverage a common technology skillset for system support.

But Does Infrastructure Consolidation Increase the Quality of Communication?

Making the move to an IP infrastructure, however, is just the first step. The real value comes from integrating these systems in innovative ways to improve communication. The diagram below illustrates a converged security solution that links video surveillance, access control, public address, two-way radios, mobile phones and VoIP on a campus’ or building’s local area network. 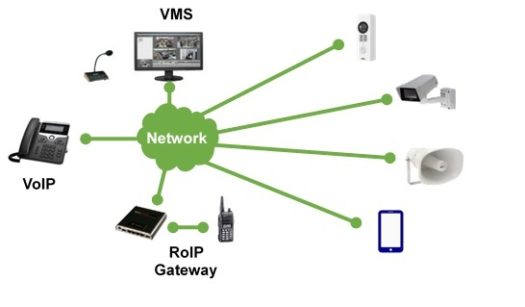 All of these devices can communicate over the same common infrastructure using Session Initiation Protocol which was standardized in 1999 and most commonly used in VoIP telephony. More recently, SIP has been ported to network cameras, networked speakers, network door stations, Video Management Systems (VMS) and Radio over IP (RoIP) gateways. Mobile phones can be added to the mix through apps loaded onto the phones from either the VoIP or VMS partner. As a result, school safety personnel have a variety of ways to communicate and interact with the school community and law enforcement when dealing with daily activities and emergency management situations.

Taking a Multi-Pronged Approach to Communication

A VoIP handset is typically used to place phone calls to other phones, but that’s only one of many options illustrated above. Here are a few others to consider:

Network speaker: Using the VMS, a school resource officer might notice someone loitering outside of the building and choose to address them remotely using a networked speaker. In this instance the officer could pick up the VoIP handset, place a call to the network speaker’s IP address and then provide a verbal warning to leave the area. Alternatively, the officer could speak into a microphone that is connected to computer where she is viewing the video.

Smart phone or hand-held radio: Another route would be to start walking towards the area and address the person through either an app on her smart phone or through her hand-held radio using a RoIP gateway. Each of these communication methods uses the same infrastructure and same protocol to reach the same conclusion. What is different is the simple fact that the officer has options to choose from which increases the opportunities to communicate.

Video analytics: What if the same situation happened after hours when there were no school resource officers on premise?  One option would be to leverage video analytics that can detect loitering and send a command for the network speaker to play a pre-recorded message that informs the person that they are on private property and being recorded by video surveillance. The addition of audio commands increases the deterrence value of video surveillance.

Network door station: A network door station could be added to the main entrance of the school to provide both a means for communicating with the front desk for access control and sending a video feed for personnel to evaluate visitors before granting them access to the building. That capability can be brought to the administrative staff via smart phone apps that provide the same functionality as if that person was at their desk. This flexibility not only improves the communication value for that individual but also lets them work efficiently by not being chained to their desk all day long.

RoIP: Radio communications over IP gateways have been in use by the military for many years and are now becoming more affordable for educational environments. The technology translates traditional radio frequency communications into SIP and sends the audio stream to other networked endpoints such as a VoIP phone or speaker. It is not entirely backwards compatible with all hand-held radios so schools would need to do some homework to ensure that it could be used with their existing radios. Investing in radios that can work with RoIP gateways will enable point-to-point or point-to-multipoint communications for faculty and staff. The technology gives a school administrator the option to broadcast a message to all faculty simultaneously or just one individual. Like the earlier example, this could be done using a hand-held radio or directly from a VoIP phone.

The Power of Keeping it Simple

Budget limitations often force schools to make difficult choices as to when and where to invest. Those decisions are compounded by the overabundance of technology choices for safety and security solutions. By choosing to focus on a common infrastructure, schools can simplify their decision criteria, improve their communications and reduce costs related to maintaining disparate legacy systems. In the end, communication will become more fluid, more timely, and provide more tactical value.