Most workers are familiar with or have at least heard of phishing attacks by now. Despite their varying levels of complexity, they share a core commonality: External threat actors pretending to be someone they are not (i.e., foreign dignitary, third-party vendor) to trick an employee into turning over their access credentials, click a malicious link, or download and open a malware-laden file. Although these kinds of e-mails are getting more sophisticated, there are often tip-offs pointing to the illegitimacy of the message. 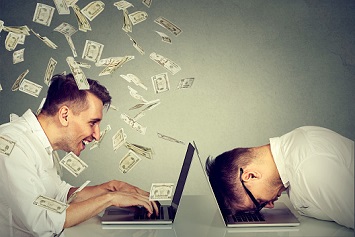 Imagine that the phishing attempt came from someone inside the company. Would you be confident that your workforce would recognize the attack?

These kinds of threats fall under the category of Business E-mail Compromise (BEC) attacks and typically occur as a follow-up to a successful phishing attempt or malware infection. Regardless of the initial attack vector, the outcome is the same: A cybercriminal has obtained the access credentials of someone in the company (usually an executive or someone in finance with access to payroll) and has been lying in wait for an appropriate time to launch a broader attack.

To get a better sense of what BEC attacks look like in the wild, who cybercriminals target, and what their objectives are, cybersecurity firm Barracuda has examined data compiled from 3,000 randomly selected BEC attacks detected by their Barracuda Sentinel® system.

Interestingly, only 40% of the attacks include a malicious link, meaning more than half appear to be nothing but plain text e-mails. Typically, these communications are drafted to convince the potential victim to send money or possibly sensitive PII. Since these e-mails are devoid of any malicious markers, it is harder for antimalware or other endpoint protection systems to detect them, as they are sent directly to victims from legitimate e-mail accounts.

The researchers at Barracuda also took a random sample of attacks at 50 random companies to look at who were the intended targets of a BEC attack, in addition to the impersonated sender. Across the sample, the CEO was the single most impersonated role, accounting for 42.9% of all attack attempts. Beyond that, however, there isn’t much clarity, as only 9% of the remaining impersonation attempts constituted people in “sensitive” positions like finance and HR, with the vast majority (48.1%) spread across other positions in the company.

Conversely, nonsensitive departments made up a little over half (53.7%) of the recipients of impersonated e-mails. This means that close to half of the targets (46.3%) were employees with access to sensitive or financial information. However, the data does not suggest that you can alleviate the threat by simply protecting those in finance, HR, or C-suite positions.

The researchers at Barracuda recommend taking a couple of steps to help prevent these kinds of attacks from being successful. Among these suggestions are: