Sometimes, security-related stories make headlines that are too absurd to ignore. This week, there were two. Since it’s Friday, let’s have a weird news roundup. 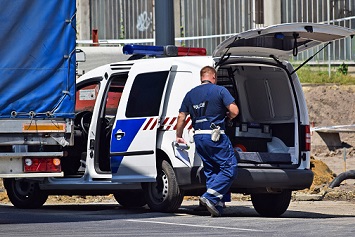 Security officers and first responders are often put in tough positions, and occasionally that involves removing a tenant from a property. Though often stressful and a bit heavy on the paperwork, tenants typically comply and vacate without the need for forceable removal. Then there’s this gentleman in Oregon.

The story revolves around the troubled Gregory Lee Rodvelt, who had been forced to surrender his property in Williams, Oregon as part of a settlement from an elder abuse case. He was released from prison in Arizona for two weeks at the end of August, so he could tie up loose ends prior to a real estate lawyer taking control of the property. Instead, he apparently spent two weeks creating a series of elaborate booby traps to stymie the courts efforts.

Joseph Charter, the real estate lawyer handling the transaction for the county contacted authorities on August 29 upon finding a sign saying the property was “protected with improvised devices.” The local law officials subsequently contacted the Federal Bureau of Investigations (FBI) to deal with the situation.

When the FBI agent arrived at the property with state bomb technicians, they found an elaborate series of traps. These included a minivan rigged with steel animal traps blocking the front gate; hot tub rigged to roll down the driveway at anyone who activated a mechanical trigger on the gate to the property (like the boulder scene from Raiders of the Lost Ark); a rat trap rigged with a shotgun that would fire upon anyone accessing the detached garage; spike strips laid in the driveway, among others.

The FBI agent was shot after blowing open the front door to the house, when someone accidentally moved a wheelchair rigged with an improvised explosive device containing shotgun ammunition. The agent was rushed to the hospital and will recover.

Though this took place on a residential property, the highly-unlikely situation presents a stark reminder of what an aggrieved tenant, or even a disgruntled employee could be capable of doing.

Did You Hear the One About the Horse?

Earlier this week CCTV cameras in a bar in the French town of Chantilly refuted every bad “horse walks into a bar” joke, providing evidence of the outcome. According to The Guardian, a young horse escaped her stable at a near by race track and took a panicked trip through a local bar. Before the animal entered the screen, you can see visibly shocked patrons and employees scrambling for cover. The video then shows the frightened animal bucking its legs as it rearranges the furniture on its way to the “back of the house.” The horse then turns and leaves much the same way it entered. Thankfully, no one appeared to get injured in the event.