In part 1 of this article, HR Daily Advisor editor Jim Davis spoke with Catherine Mattice-Zundel, a consultant, coach, and trainer about workplace bullying, including where it parallels harassment and what the differences are under the law. Today we’ll look at the importance of accountability as well as some methods for preventing bullying. 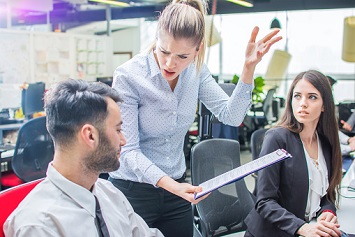 If bullying and harassment are essentially the same, it made me wonder if modern approaches at stemming workplace harassment are sufficient for addressing workplace bullying. Mattice-Zundel emphatically stated, “Currently? Not at all. I am so frustrated at the harassment prevention efforts that we are doing right now. Clearly they don’t work.”

“The current prevention training that I have looked at focuses on prevention because of the law. Instead of preventing harassment because it’s the right thing to do.” The problem has gotten too legal, she says, and that’s part of why the problem isn’t being solved. It has to get back to the human element.

Perhaps one of the most disturbing things I see when publishing content about sexual harassment is that the training often doesn’t work. From boring training videos to failure to impose sufficient consequences (or any consequences) on those who have participated in sexual harassment, training as it exists right now leaves a lot to be desired.

Mattice-Zundel says that accountability lives at the center of a solution. “If you are going to train people on respect, then you have to hold people accountable to that behavior, and measure them on it, and discipline them if they step out of line.” When companies do not hold bad actors accountable, or worse, punish victims, something terrible happens. People don’t report harassment. Mattice-Zundel notes that some figures suggest 75% of sexual harassment victims do not report it. If people are not reporting sexual harassment, which comes with legal avenues, what does that mean for bullying?

Mattice-Zundel rather pointedly says, “If you have a leader who won’t stand up for positive behaviors, you have the room for bullying and harassment to thrive.”

The Contagious Nature of Bullying

Bullying is a learned behavior, and because it’s learned, it can also be taught. I asked Mattice-Zundel about how contagious bullying might be. “I’ve coached individuals who learned it from others” says Mattice-Zundel. She relates stories of people who learned aggressive managing from their managers and continued it forward. “Aggressiveness is contagious just like happiness is,” she says. Being soft on bullies or allowing it to happen in the workplace can become an ongoing legacy. “Culture is about infectious behavior, good or bad.”

Mattice-Zundel says that while many current systems for dealing with bullying and harassment might be wanting, there are methods for preventing workplace bullying. She recommends:

Mattice-Zundel cautions that “it’s a process, it’s not easy.” But that shouldn’t stop people from trying, she says.

What if the Leaders Are the Bullies?

The Workplace Bullying Institute says that more than 70% of bullies in the workplace are the bosses. I asked Mattice-Zundel what happens when the problem is at the top. “Unfortunately there isn’t much you can do as an HR professional unless you have the right kind of relationship with the right people,” says Mattice-Zundel. If you don’t have a great relationship with the CEO or other leadership, it can be an uphill battle.

Mattice-Zundel explains, “CEO’s also need to be told that their behavior isn’t going to work. One approach is to talk about harassment claims, that they are opening the door to being accused of creating a hostile work environment.”

What if all of that doesn’t work? Mattice-Zundel says, “If you have tried everything, I often tell people to quit. Leave.”