When we think of workplace violence, we far too often think about physical violence, which is the end point in a series of events. This isn’t overly surprising, given the visceral visibility of violent actions. The problem is, when we focus on the physical violence, we tend to forget about the events that either lead up to those actions. Or worse, we neglect quieter forms of interpersonal violence that don’t rise to the level of broad visibility, like bullying, that could simmer within your organization for years. 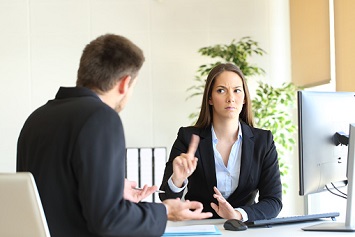 Jim Davis, the editor for our sister publication HR Daily Advisor spoke with Catherine Mattice-Zundel, a consultant, coach, and trainer. Their discussion focused on the roots of workplace bullying. Research studies provide a wide range of data regarding how many people experience bullying, but they agree that the problem is widespread, destructive and, with the help of people like Mattice-Zundel, solvable.

The Effect of Bullying

Mattice-Zundel says that the significant effects of bullying in the workplace are very well understood, noting that there have been 40 years of academic research into the topic. She says, “people at the receiving end of bullying experience anxiety, stress, and depression.” Research shows that many develop post-traumatic stress disorder (PTSD), something that Mattice-Zundel says she has witnessed firsthand. Indeed, workplace bullying is so serious that it can result in suicidal thoughts, tendencies, and behaviors combined with drug use.
Mattice-Zundel finds that the results of domestic violence make a good analog for bullying. She says, “people feel powerless, and helpless, and alone, and trapped, and that’s all very damaging.” With endless studies and reports about the value of employee engagement and motivation, imagine how destructive bullying can be to those efforts.
The destructive effects of workplace bullying do not stop at the victim. They also permeate those who witness the bullying, says Mattice-Zundel. “They are also living in fear, stress, and anxiety,” she says.

The Connection Between Workplace Bullying and Harassment

There seems to be a perception that bullying and harassment are somehow separate. I certainly read articles regularly that are about one or the other topic. When I asked Mattice-Zundel about the relationship between bullying and harassment, she said, “they are the same behaviors. The only difference is who they are aimed at.”

The who matters a lot, legally speaking. Mattice-Zundel says, “If you bully someone because of their race or religion, then that’s harassment.” She continued, “if you are an equal opportunity bully then you are protected” under the law. What are the consequences of this? Some employees will file a hostile workplace suit because they are being bullied. According to Mattice-Zundel, the focus is often on whether a protected group was the target. A lot of times, in her experience, investigators come back and say that there was no protected class so there is no suit.

Some victims have no recourse when they are not being targeted because they belong to a protected class. But that doesn’t have to be the case, says Mattice-Zundel. At the top level, she suggests opening workplace harassment laws that are currently based around protected groups to all people so that harassment wouldn’t be tolerated in any form.

Another approach, according to Mattice-Zundel, would be for the Occupational Safety and Health Administration (OSHA) to take workplace bullying under its auspices as a workplace safety matter. She says that “people have to feel emotionally safe as well as physically safe.”

In fact, Mattice-Zundel looks at workplace bullying from a safety perspective. For example, when she encourages employers to have an antibullying policy, she calls it a “healthy workplace policy.” These policies require respect and civility in the workplace. “It holds people accountable to being civil to one another,” says Mattice-Zundel.

The kinds of stress that bullying causes for victims and witnesses can be extreme, and they can result in physical expressions of that stress. Mattice-Zundel says, “if you are stressed out all the time your muscles are tense, you are getting headaches, your back hurts all the time, you can’t eat, you can’t sleep, you get heart disease.” These problems certainly constitute a workplace health issue.

Mattice-Zundel says she would go so far as to say that bullying is a form of workplace violence. She gave an example of someone who yelled so hard at an employee that the employee had a panic attack, his tongue swelled up, and he gave such a powerful fear response that he could not move.

There is another type of workplace violence that can occur surrounding bullying: the occasional violent reaction of those who are bullied. Mattice-Zundel explains that she had two different clients get in touch with her because an employee that had been bullied committed suicide on the worksite. In each case, the victims left a note about their treatment as the reason why they killed themselves.

In part 2 of this article we’ll explore more about bullying, including the importance of accountability as well as some methods for preventing bullying.