Whether you are working for a large corporation with thousands of employees or a small business contractor with a handful of employees, there are times that will require employees to be lone workers. During these times, a lone worker must make many decisions to successfully complete a task on time. To work safely, these employees need to assess the degree of risk and determine the best course of action to mitigate that risk. 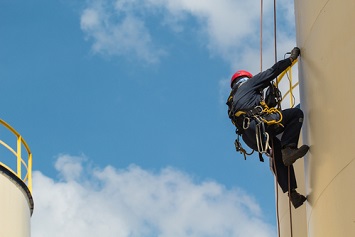 Lone worker risk management (LWRM) is a systematic approach used to consistently determine the best response to a given set of circumstances. An employee’s intentions are based on this approach. LWRM is about gathering information, analyzing it, and making decisions, which aren’t as straightforward as an apprenticeship, or skill set training. Learning how to anticipate a situation and react in myriad types of situations while working may be the most challenging sequence a lone worker encounters during tenure.

LWRM sounds good on paper, but it requires a method so lone workers can understand and use it in their job task. One practical application is the “Four Ps”: prejob, process, public, and programs. Each area consists of a set of challenges and opportunities that every lone worker will encounter. The Four Ps are used to evaluate a lone worker’s current situation at key points during the task or when an emergency arises. 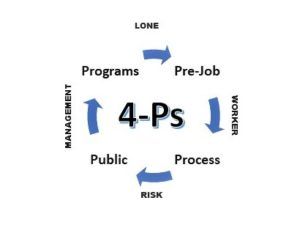 The Four Ps are based on the idea that lone workers have four variables—prejob, process, public, and programs—that impact their environment and force them to make time-sensitive decisions in the field and on the move. This stems from the belief that human decision-making tends to be lagging instead of leading. A change must occur and be detected to drive a lone worker to make a risk management decision. For instance, many workers complete a job hazard analysis (JHA) before a job task, which anticipates risks that may be encountered during the job. Each risk is assigned a safeguard. If the job’s risks cannot be reduced to an acceptable level, the job may be put on hold or canceled. Informal research shows that although JHAs are useful documents for reducing risk, they are almost never used outside of formal planning meetings. The Four Ps concept is an attempt to summarize the information that would be contained in JHAs and other available models to be used in a lone worker environment.

The “prejob” can also be called the “job plan” or the “work order task.” It contains the basic elements of job planning, associated hazards, procedures, special precautions, energy source controls, and personal protective equipment requirements. The prejob should be reviewed and updated during the task. A delayed start due to emergent work, missing parts, or inclement weather may radically alter the job plan. The prejob is about not only the job plan but also the events that surround the task and allow the worker to accomplish it. The prejob should be continually modified and is especially responsive to changes in the three remaining Ps. The Four Ps check exists to remind the worker that the day’s job task is subject to change at any time.

The “process” is familiar to most workers. It consists of the usual array of mechanical and cosmetic issues that maintenance mechanics or operators can identify. With the introduction of remote operations and supervision, the process has expanded to include automation of controls, software currency, and cyberattacks, which were unknown a few years ago. The process’s objective is to proactively identify, evaluate, mitigate, or prevent a hazardous energy release that could occur because of failures in the process. Lone workers should ask themselves:

As a lone worker, have you ever taken the time to assess how the public can influence a job’s risk or how you can influence the public’s risk? Imagine you are a delivery person or a utility worker who needs to safeguard against an aggressive dog or a disgruntled customer. When thinking of the public’s safety, what comes to mind? One thought might be “environment.” The environment is the public’s safety. Maybe you are a pipeline worker, a commercial driver, or a train conductor who transports hazardous chemicals. What happens if you have a loss of primary containment that harms the environment? Your employer should have developed and maintained an effective public safety program, but if not, I challenge you to make this a point of discussion at your next safety meeting.

In today’s work environment, it is easy to experience information overload due to the number of “programs” your employer may have in place. You may constantly question whether you are following program requirements or wonder which program applies to the job task. Programs and other governing documents are developed and implemented to support employers in meeting laws and regulations and to provide tools to assist with protecting employees and the public. Workers should also consider what their capabilities are regarding last-minute changes in job task and their ability to make large-scale changes while working alone. The LWRM process is simple: At least four times before and during the job, a lone worker should review and consider the prejob, process, public, and programs and make appropriate decisions. It is often said that the failure to make a decision is a decision. Under LWRM and the Four Ps, even the decision to make no changes to a current job is made through careful consideration of all risk factors present.